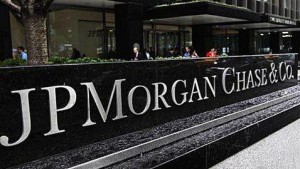 JPMorgan Chase announced on Tuesday that it is planning to cut its employee ranks by close to 17,000 jobs over a two year span. At the same time, it will continue its program of global expansion, according to Fox Business.

The bank told investors that close to 4,000 jobs will be shed from its 5,600 branch offices. Those cuts will come from attrition. Another 13,000 jobs will be cut from the bank’s mortgage services unit. There are is a total of 260,000 or so workers with the bank.

Other banks that have announced cuts include 30,000 from Bank of America and 11,000 from Citigroup. The co-head of investment banking for JPMorgan said that the bank will place a ‘huge priority’ on expanding the global reach of the bank in 2013. The number of global corporate bankers at JPMorgan has tripled since 2009.

The executives speaking to investors defended the bank’s size, which is the second in the country based on assets, claiming that the size allows for efficiencies that smaller banks cannot afford. The executives also said that the bank’s size attracts customers, with many of them eventually using multiple services from the bank.

The CEO, Jamie Dimon, repeatedly said that the bank is going to seek a strategy of ‘organic’ growth instead of expanding operations using acquisitions. He said the new regulations could cause the bank to lose money, but he is not concerned if they do not interfere with the ability for the bank to compete globally.

“We’ll be fine as long as we can freely compete with everyone else in the world,” he said.

When Dimon was asked about excess capital being held by the world’s largest banks, Dimon said that the bank is going to return it to shareholders “in the most intelligent way.” He also said that a group of management changes at the bank this past year were “a little bit too much change,” but that they were necessary.

The bank had 5,614 branches open when 2012 came to an end. The bank said that it plans to increase its branches by close to 100 more. In terms of size, the branch network for JPMorgan Chase is second in the country to Wells Fargo & Co.

October Job Scare
Let’s Get Social
Feel like getting in touch or staying up to date with our latest news and updates?
Related Posts
Latest In Work Relationships