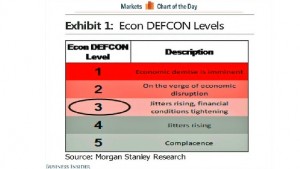 October 17th is the due date for when Congress must establish the new debt ceiling for the government, since it has so far failed to keep within the budget it set for itself, and now has to do the equivalent of asking its credit cards to give it more money to spend. Not a smart way to budget, perhaps, but meanwhile we’ve resorted to a government shutdown with hundreds of thousands of employees furloughed to help ease the ache of having no extra funds to spend. Though citizens are expected to spend within their budgets and manage their household the government has failed to do so.

Meanwhile, Republicans are using the opportunity to twist the Democrats’ arms on hamstringing Obamacare. President Obama, in a speech earlier this week, compared the practice to a criminal demanding a ransom, and refused to allow any bill but a “clean” bill that had no strings that would limit Obamacare. Since both Democrats and Republicans are debt set on their principles, we could lead to a debt default, which would send the nation into another recession comparable to the 2007-2008 recession.

Morgan Stanley has therefore said we are at “DEFCON 3,” with “nascent signs of financial stress, and jitters are on the rise.” DEFCON 1 would mean “economic demise is imminent.” The rating system is a take of the U.S. military’s “defense readiness condition, or DEFCON.

The Chicago Board Options Exchange Volatility Index, or VIX, has also shown a rise, suggesting that anxiety is mounting with investors, as it is with the rest of us, on the final outcome of this bizarre gambit of a government that refuses to spend within its own limits, and a bipartisan competition willing to sacrifice the nation.

Job seekers, meanwhile, are advised as always to remain plucky and determined, because whether things go smoothly or not, that is the best attitude to keep in looking for employment. Good things happen even in bad times, and the right job is probably waiting for you no matter what fiasco congress gets into.

Hostess to Reopen, Hiring a Large Set of Fresh Workers
Let’s Get Social
Feel like getting in touch or staying up to date with our latest news and updates?
Related Posts
Latest In Work Relationships
BCG FEATURED JOB

Director of Legal Services The candidate\'s duties include: Manage all aspects of the firm to incl...