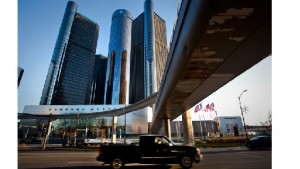 Now that Detroit has become the largest U.S. city to declare bankruptcy, many other large cities are watching to see how it all plays out. Of biggest concern to many of the 700,000 who live in Detroit, the major question regards what the bankruptcy means for retirees. Many workers, ranging from librarians, to police, to 911 operators, specifically chose their jobs considering the promised pensions, but now there is talk of pension cuts, pension reductions, of living in poverty after working the city for all their lives.

“You’ve got to have great empathy for them,” said Gov. Rick Snyder, who signed off on the bankruptcy. “These are hard-working people that are in retirement now — they’re on fixed incomes, most of them — and you look at this and say, ‘This is a very difficult situation.'”

Difficult yes, but not the sort of situation to he wants a federal bailout to help them with.
“Does Detroit have a problem?” asked William Shine, 76, who once worked as a police sergeant. “Absolutely. Did I create it? I don’t think so. They made me some promises, and I made them some promises. I kept my promises. They’re not going to keep theirs.”

And that sums up how many retirees feel who choice lesser paying careers specifically for they anticipated pensions that are being taken from them. This should be a heads up for job seekers who are wondering what sort of career to seek. Many feel out of control, losing the pensions they had planned to live on, and some are even considering seeking extra work, in their golden years, working some small nonsense jobs just to make ends meet.

“It’s not anxiety, it’s fear,” Ms. Kaczmarak said of the anticipated cuts. Though she decided to retire early due to health reasons, she has come to reconsider the choice.

First Niagara Financial Group Cutting 170 Branch Managers and Teller Supervisors
Let’s Get Social
Feel like getting in touch or staying up to date with our latest news and updates?
Related Posts
Latest In Work Relationships