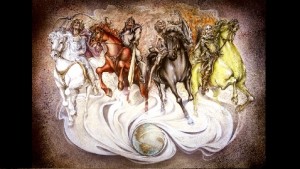 After the apocalyptic rhetoric surrounding the Recession of 2007, and the vicious sounding rhetoric about the “fiscal cliff” — which was a phrase more people used than knew what it meant — perhaps we are getting a bit tired of being “afraid, be very afraid.” At least, investor aren’t too worried about the four horseman who are to be signaled if the U.S. defaults on its debt, with the deadline approaching on the 17th.

“Doomsday is nigh, and everyone shrugs,” said Nicholas Colas, chief market strategist at CovergEx group.

In the same way, other investors are doing little to prepare for the dastardly possibility that the world may soon die in a fiery inferno. “I’ve not done anything,” said Brian Doe, a wealth adviser at Gratus Capital Management. “People in Washington are stupid, but not that stupid.”

Not that the unthinkable won’t happen. As another official said, “Nobody can imagine the consequences, so we don’t have any plans.”

This is akin to the old rabbi who was asked to rush to see the upcoming of the messiah. He did come to attend the spectacle, but only after he finished planting his garden. Job seekers should keep to business as usual.

Major companies have been banking their blood, or building up the amount of cash they have, in case something traumatic happens. After the Lehman Brothers collapsed, many big business could not secure needed loans. They don’t want to be in that position again.

As Colas said, “Investors know that for better or worse, most companies have become their own banks. In a way, we’ve been preparing for this [default] since the financial crisis.”

That is why hiring has been tepid, with $1.1 trillion in cash hoarded instead of using to expand and hire. Job seekers can feel a palpable relief when congress gets its ship in order, assuming they do.

New Stats: Unemployment at a Longtime Low!
Let’s Get Social
Feel like getting in touch or staying up to date with our latest news and updates?
Related Posts
Latest In Work Relationships