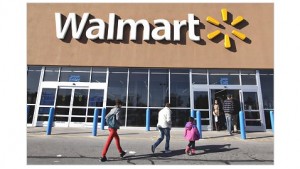 In the closest thing we’ve seen to a proletariat uprising, Wal-Mart employee continue to demonstrate for better wagers and labor rights, with demonstrators rallying across the country. Along with the fast-food strikes, Wal-Mart employees are striking for better wages, demanding the world’s largest retail employer pay its employees at least $25,000, something close to a living wage, for full time employees. Job-seekers considering the possibility should take the protests as a word for the wise.

The demonstrations have lead to 21 arrests, with demonstrators in Los Angeles targeted hard. One worker and two former workers were arrested in New York City Thursday when attempting to deliver a petition to a company board member.

Their demands are simple: they want to be paid a livable wage. “Wal-Mart is the largest retail employer in the world and yet they choose to keep their employees working below poverty-level wages,” said Barbara Gertz, who was arrested at a rally Thursday.

Wal-Mart, meanwhile, has downplayed the protests, saying “Wal-Mart will continue to serve our customers in over 4,600 locations [self-plugging]. A handful of union-orchestrated media stunts, made up of primarily union members and activists, don’t represent the views of the vast majority of the 1.3 million associates who do work for Wal-Mart.”

Whether the protests are simply a media stunt, or whether things really do stink at Wal-Mart, job-seekers would do well to consider their options before joining the goliath store.

Employment Struggles in Horry County, South Carolina
Let’s Get Social
Feel like getting in touch or staying up to date with our latest news and updates?
Related Posts
Latest In Work Relationships