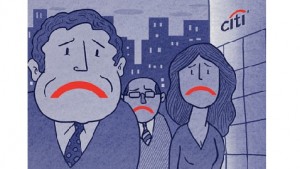 Citigroup is responding as other banks have to the end of the refinancing boom; now that interest rates are rising, fewer are refinancing their mortgage, and that means for Citigroup that they are eliminating 1,000 jobs in Nevada and Texas — 760 in Las Vegas, 100 in Irving Texas, and the remaining employees work from home.

Wells Fargo ,the nation’s largest mortgage lender, laid off 4,000 jobs last month, and Bank of America Corp laid off 2,100 employees. Responding to the market with such drastic cuts seems perhaps a bit drastic, but as Citigroup explains, they are just running their business.

“In response to decreased demand for mortgage originations and refinancing, Citigroup is eliminating some positions,” said a spokesman. “These actions reflect our ongoing efforts to increase operation efficiency, adapt to changes in the marketplace, and position the business for the future.” Or, in other words, it’s just business as usual, and one more place to avoid in the job hunt.

This behavior is not unique to just a few banks. “All the banks, big and small, are responding to the drop in mortgage revenue with cost and head-count reduction,” said Frederick Cannon, an analyst with Keefe, Bruyette & Woods.

Job seekers hoping to work in the mortgaging market may be SOL for the time being, though of course such skills are transferable, and even Citigroup is working to retain as many of its employees as possible.