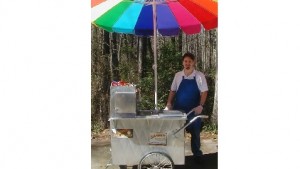 Necessity is the mother of invention, and genius is the father. When forced by circumstances to cope with a difficult situation, with something like the “great recession,” creative people fare well by being – creative. Such people might be interested in finding a nontraditional way to make a career, and might consider a book by Abigail Gehring entitled Odd Jobs. Some unlikely jobs can earn a surprising amount of money. Being a hot dog vendor, for instance, carrying around a cart and serving hot dogs in busy city venues such as New York, can make as much as $100,000 a year, or maybe $30-$80,000 in a smaller city.

Gehring’s own father was a hot dog vendor, and managed to put four kids through college on it.

“Odd jobs can definitely bring in a good income, but often it requires a great deal of creativity, diligence, and a willingness to take risks,” said Gehring. “Certainly there are high costs to pay for the education and training required to become a doctor or a lawyer, but if you’re a bright and hardworking person, either one is a pretty straightforward path to success. There are more unknowns in the odd job road to success, and so a lot of people don’t consider it.”

These sorts of lists can inspire us not to just line up and be, say, a “body part model” making up to $1,000 an afternoon, but to explore the possibilities of a saturated job market on jobs that others might not have considered. A clever man need never starve. So if you have a sense of adventure, consider an alternative career: it could pay surprisingly well.

PayPal to Cut Close to 400 Jobs
Let’s Get Social
Feel like getting in touch or staying up to date with our latest news and updates?
Related Posts
Latest In Work Relationships