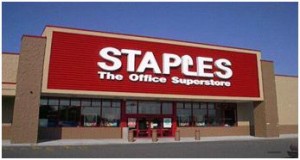 More than 10 percent of the stores operated by Staples across North America will be shut down by the end of 2015, according to The Associated Press.

Staples said on Thursday that close to half of its sales are online and the company is working to reduce its costs and become a more efficient operation. The company is looking to close 225 stores, saving $500 million by the time 2015 ends.

The company did not mention how many jobs would be lost or what stores will be closed.

There are 1,846 Staples stores in North America and Canada, with the majority of them in the United States.

Ron Sargent, the Chairman and CEO of Staples, said Thursday that the company is not giving up on retail stores. He thinks that customers still want the ability to visit a brick-and-mortar store due to the convenience of having the product in hand immediately.

“That said, stores have to earn the right to stay open,” Sargent said. “We are committed to making tough calls when it’s necessary.”

Over the past couple of years, Staples has been cutting the size of its stores in half.

“It’s clear we underestimated the headwinds we are facing in our retail stores as well as demand for core office supplies,” he said.

The company is headquartered in Framingham, Massachusetts. It reported earnings of $1.16 per share in 2013, which is short of the $1.21 to $1.25 per share it expected in November.

Staples to Close Stores Across North America by Jim Vassallo
Tags: hundreds of Staples stores to close, Staples, Staples to close stores
Tweet Like Plus Pin It Share

Apple’s New Solar Panels Will Create 100 Jobs
Let’s Get Social
Feel like getting in touch or staying up to date with our latest news and updates?
Related Posts
Latest In Work Relationships