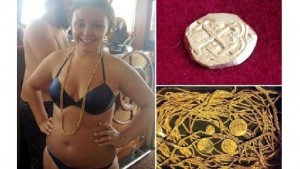 When a river is overflowing, streamlets sometimes open up, cutting new channels, exploring routes impossible when the river is dry. Likewise, with the market saturated in job searchers, the time for alternative job-hunting is upon us, or at least for those adventurous or who have no proclivity for cubicle demarcated normality to begin with. Take Rick Schmitt, professional treasure hunter. He has just discovered $300,000 in gold off the coast of Fort Pierce, after years of diving and exploring with his family.

“This was like the end of a dream,” he said. Not that he has been like so many other treasure hunters, persistently dry in his explorations. His son found a silver platter worth $25,000 in a dive back in 2002 and his daughter, who started diving with the family when she was only 6, has witnessed them find more than typical junk, including $250,000 in gold coins last summer, though she laughs that they amount to “world-class recyclers” with how much junk they pull up.

The Schmidt family says “the greatest treasure is time with the family,” as Lisa Schmitt, Rick’s wife, opined. Not that he simply gave up solidity for treasure; he worked in Sanford-based pest control business until he retired in 1999. Yet if the market really is so rough, he might be an example of trying something new. Because what’s living if you waste all your time making a living and not in fact enjoying life?

Employment in Alaskan Fisheries Increased from 2011 to 2012
Let’s Get Social
Feel like getting in touch or staying up to date with our latest news and updates?
Related Posts
Latest In Work Relationships