Home  » 38 Percent of Americans Get No Paid Sick Days 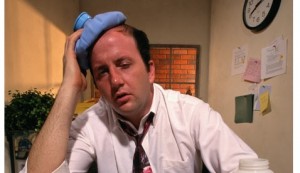 Should Americans be paid to stay home from work on sick days? There is no federal mandate for such a thing – though there have been many attempts – and a full 38 percent of workers have no paid sick time off at all: you get sick, tough luck! The Center for American Progress says that about 40 million workers lack sick days, and many of them are restaurant workers and so forth. They work where they can find employment, but would rather have such niceties as the comfort of healing in peace.

“It’s a terrible situation for someone who has a serious health condition or a sick child and can’t stay home for fear of losing wages,” said Charles Lamberton, an employment lawyer. “It’s often a case, especially for lower-paid workers and part-timers, of not having money to buy groceries if they take unpaid sick days. People end up choosing work over getting healthy.”

Naturally enough, choosing work while being sick means infecting other employees, which is not a smart move for employers. And America is the only developed nation to lack a mandate for sick days. Should we change that?

“[Businesses] feel they are already being over-regulated by government and don’t want to be forced into doing it by law,” said Karen McLeese, vice president of employee benefit regulatory affairs at CBIZ Employee Services. “Most firms offer sick days. But for those that don’t, they’ve got to deal with Obamacare, and a new law on paid sick leave would be just one more regulation to deal with that they don’t want.”

Keeping up with other nations that have top heavy government, as most the industrialized world does, may not be “The American Way,” but some law makers are trying to make such legislation anyway, such as Sen. Tom Harkin (D-IA) who suggested a national legislation to allow full and part time  workers to earn sick days for themselves and their families over the year. Whether such legislation will garnish the necessary votes is yet to be seen. Meanwhile, insofar as there is a choice in the matter, asking a prospective employer their policy on such matters is smart.

Layoffs in State of Michigan
Let’s Get Social
Feel like getting in touch or staying up to date with our latest news and updates?
Related Posts
Latest In Work Relationships