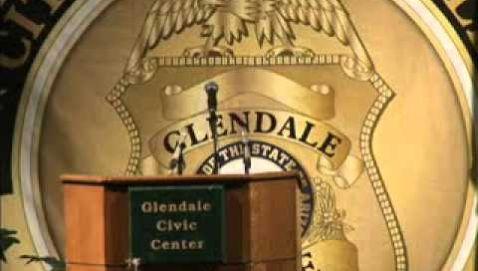 One year after Glendale police Office Brad Jones was killed on the job, his family was on the verge of its health insurance being removed by the city.   He was 27-years-old with two children, according to the Arizona Republic.

City government made switches in September to prolong Glendale’s slashed benefits for the Joneses and other families that have had a family member fall in the line of duty.  Jim Brown is Glendale’s interim human-resources director.  He said the Jones family’s situation forced him to request interim City Manager Horatio Skeete to let them go on the city’s plan, similar to what Glendale does for their retired workers.

“We feel like it’s the right thing to do by our employees,” Brown said.  “They get the benefit of the city’s pool of employees. If they were to go out on their own to try to get insurance … they would pay a significantly higher rate,” he said.

Cindy, his wife, and their children were in receipt of cost-free insurance through Glendale under the Arizona law “Harrolle’s Law”.  This forces companies to spend for benefits up until twelve months after an officer falls while on the job.  No exact figure is known for how much Cindy will pay in the future.

Jones was gunned down in October of 2011 while making an arrest.

The union is requesting Glendale to go above and beyond in their payments.  The Glendale Fraternal Order of Police acknowledges the city’s resolution to let the family purchase insurance through Glendale but that they should instead cover the bill for them.  It would cost approximately $520 for the city to foot the bill for a name-brand provider.

Julie Reed, the president of the Glendale Fraternal Order of Police, is the spokesperson for this recommendation.

“We want to make sure that they are taken care of medically (and) they have all the care that they need,” Reed said. “I just don’t think that’s a worry that they should have.  Our premiums every year are based on what the city pays out on average, and then they split the cost (with workers).  How can you not? We owe it to them.”

The Concerns of Police Survivors organization supports this notion as well.

“That still keeps you in the system so you don’t have to go out and just buy a policy on your own,” said Jan Blaser-Upchurch, president of the state chapter.  “So that is helpful.  Sometimes, those rates are kind of shocking because your (spouse is) not an employee anymore.”

The decision for lengthening these benefits rests squarely in the hands of the city manager and council.  Brown says he has authorization to make such suggestions to the two parties and may elect to do that.