Home  » Student Loans to Double for Many 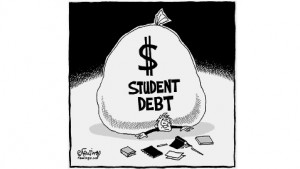 Loan legislation is affecting 7 million students who plan to take or renew student loans after July 1st. Due to deadlock in congress, between a Republican dominated House and Democratic heavy Senate, there has been a problem over what to do with student loans. Federal Stafford loans – the most popular for college students – will be increasing from 3.4 to 6.8 percent, or costing about $3,834 extra in additional interest over a ten year period. While this will not effect the 37 million Americans already paying off existing loans, it is a stifling problem for many, and will effect those arriving on the scene and hoping for help in paying for their college education.

“Why are we making it more difficult for kids to start their lives by putting them in hundreds of thousands of dollars in debt before they’re 25?” asked Jasmine Flores, a student starting in the fall, as reported by the Daily Beast. As a college education is so integral a part in most career paths, and jobfinding is easier with a degree, this is an important consideration.

Most upcoming students will be straddled with the heavy 6.8 percent loans, and that at a time when they are just trying to make it, get set up with a job, a sort of tax on the poor, as some critics have called it.

The Republican-controlled House has passed student loan legislation, but the Democratic-controlled Senate has resisted it. As Sen. Jackson Reed said, “no deal is better than a bad deal,” and so distrusts the Republican plan, that he would rather see the loans simply double than float on the free market.

Whether legislation can work together to smooth over the difficult transition period form education to joining the job market remains to be seen, but Congress can still retroactively undo the doubling of the loans if they get their act in order.

Sen. Elizabeth Warren told The Daily Beast that she shuddered at the idea of a rate increase, which she thinks amounts to “a tax that’s paid by middle-class kids, working-class kids, bootstrappers that are out there trying to make something of themselves.” Getting a job is the first step,  naturally, after an education, and then paying off the loan, but then the loans are exorbitant and good jobs hard to find, college education becomes an anchor holding one down.

Coca-Cola Eliminates 750 Jobs in the United States
Let’s Get Social
Feel like getting in touch or staying up to date with our latest news and updates?
Related Posts
Latest In Work Relationships