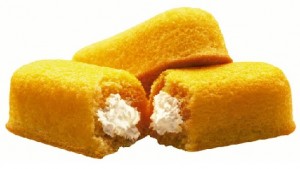 Hostess underwent an epic bankruptcy and has been resurrected, nominally at least, by a company that bought the right to their name and to sell their products. They were done in, some say, by over eager teamsters who went on strike and brought the Twinkies factory to its knees. Many are still seeking employment.

James Jones was one of those strikers, and he’s worked at Hostess for 26 years, but now makes even more working at a Unilever PLC plant, making $2 an hour extra from his previous wages of $16.32. He also has better benefits and says that he voted for the strike and “I have no regrets.”

Well, what’s to regret? Everything worked out nicely for him! The company he previously worked for, meanwhile, went down into a sweltering doom, and other employees have been less likely finding any work at all, most of them make less than before, and as for the new hires into the new Hostess, they will be making much less at their job. It’s easy not to have regrets when you personally get a pay raise, but what about Craig Davis, who was a forklift operator for Hostess? He’s been unemployed since November. At the new Hostess, he would be making $11 an hour with a chance to make $14, and regards the situation as a “slap in the face.”

Looking for jobs is difficult, and though the new Hostess does offer some employment, it’s less swank than before, with no union and passable wages.

C. Dean Metropoulos, the CEO and co-owner of the new Hostess, thinks otherwise, saying the company “has put together an excellent and competitive wage and benefits program for our employees.”

Some people take what they can get. With many former employees stilted, jolted, and lacking in any vocation, there is something to regret, and a sense of loss. Davis said he was eligible to collect $1,800 a month at age 55 under the previous Hostess, but now can only draw $500 a month. The collapse of a major company is something to take to heart. Some will get hired at the new place, but many are still seeking jobs.

Rich People Have Different Toxins in Their Bodies Than Poor
Let’s Get Social
Feel like getting in touch or staying up to date with our latest news and updates?
Related Posts
Latest In Work Relationships