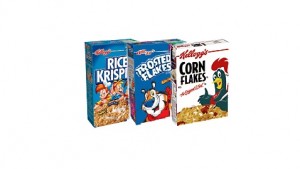 Kellogg, the world’s largest manufacturer of breakfast cereal, has been facing stiff competition from their rival, General Mills, and saw profits dip below expectations. That is why they have decided to cut up to 7 percent of their workers by 2017, hoping to press harder on those who remain, while cutting as much of the fat as they can, making their business lean and more efficient.

Thus the maker of Corn Flakes and Eggo Waffles will be making a few new job seekers, coming up, in answer to their quarterly decline in sales.

Not only has General Mills caused them headaches, but they are facing the competition of increased popularity of other breakfast items such as yogurt and frozen egg sandwiches, as the market’s interest in the popularity Kellogg’s original, cereal and milk, ebbs and wanes with tastes and times.

With fewer jobs at Kellogg’s and more seeking, of course the market becomes a tad more competitive for those already out there, scouring the job market.

The pattern is as to be expected: businesses feel the pinch of competition, and hope to do better by cutting workers and presses those who remain. Such a situation is the market job seekers are facing, but they can nevertheless succeed with pluck and determination.

Are Stores Smart to Open on Thanksgiving?
Let’s Get Social
Feel like getting in touch or staying up to date with our latest news and updates?
Related Posts
Latest In Work Relationships