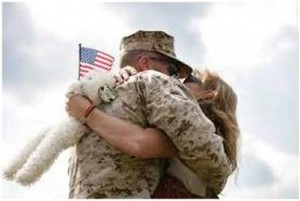 The Military Officers Association of America and the Institute for Veterans and Military Families at Syracuse University announced the results of a join study on Wednesday, according to Stars and Stripes.

The study focused on military spouse employment and it found that 90 percent of female spouses said they were either underemployed or more than qualified for the job they held at the time of the study. The study found that military spouses earn 38 percent less than civilians and are 30 percent more likely to be unemployed.

“The results of the 2013 Military Spouse Employment Survey demonstrate a need for concerted efforts to improve the employment issues currently faced by military spouses,” Norb Ryan said. Ryan is a retired Vice Adm. And MOAA president.

The main reason for trouble finding employment is frequently moving to new locations.

“The increased likelihood of moving from one geographic location to another further compounds economic issues for these families,” the report stated.

Some of the other difficulties include limited job opportunities where troops are stationed and perceptions by employers of military spouses.

The study did not compare job opportunities between spouses overseas and those in the United States, but those overseas are more likely to find problems getting work. The reasons for this include limited on-base jobs, language barriers and SOFA restrictions.

The report recommends that the military find methods to reduce PCS moves that families need to make during a military member’s career.

“Any policy or recommended modification to personnel management within the Armed Forces, which reduces the frequency of PCS moves, will benefit the female spouses with respect to career advancement/promotion, increased earnings potential, and improved job/occupation opportunities,” the report stated.

Spouses between the ages of 18 and 24 had a 30 percent unemployment rate, which is higher than all the other age groups. It is also three times higher than civilians.

“The results of this study demonstrate that these challenges are significant and pervasive,” said IVMF Director of Research, Rosalinda Maury, in a news release.

If EITC Were Extended To Childless Workers, 300,000 Would Escape Poverty

Jack Daniel’s Factory to Hire 90
Let’s Get Social
Feel like getting in touch or staying up to date with our latest news and updates?
Related Posts
Latest In Work Relationships