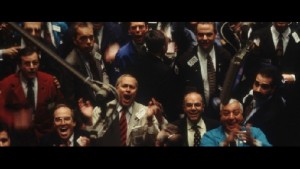 Though the stimulus program created by Ben Bernanke, called “quantitative easing” is meant to help the country’s “national crisis” by stimulating Wall Street, their program, which buys up billions of dollars in bonds to help investors (the rich) make more money, this is supposed to create more jobs. Only the wealthy investors, who pretty much get easy money this way, don’t exactly want more jobs. The feds have gestured at cutting off their stimulus program once unemployment falls to 7 percent, and to raise short-term interest rates, which are at zero percent now, once employment gets to 6.5 percent.

So while such incentives have allowed investors, who are among the top ten percent richest of Americans, to recover all their wealth since the recession of 2008, and not only that, but to become the richest they’ve ever been, with a wealth disparity the greatest its been in a century, they naturally enough would whoop and cheer, as they did when the Labor Department announced that the U.S. economy created only 148,000 of an anticipated 180,000 jobs in September.

The Federal Reserve’s plan to employ the poor by paying the rich may not have worked out exactly right. Job seekers therefore are right to be indignant that others are feeding off their misery.