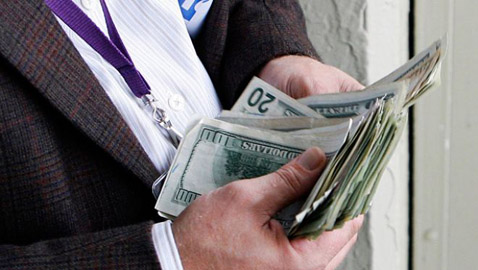 There have been many studies that have sought to put a price tag on happiness. How much does a person need to make him say, okay this is enough I don’t need more, this is enough to keep me contented and happy for the rest of my life.

There is a popular adage that money cannot buy happiness, however, it is now evident that, it can after all do so. But it is going to cost a whopping amount. According to a new poll, an annual household income of $161,000 is enough to instill in people a sense of security, contentment and happiness in life.

Last year, a study had put the figure for personal satisfaction and happiness at $75,000. However, a new report by Skandia International’s Wealth Sentiment Monitor says that is far from enough and the new “happiness income” was more likely the amount that people would be comfortable with.

But how does one really define “happiness?” The richest in the world are not necessarily it’s happiest. Two of the world’s richest people committed suicide. Moreover, there were other factors like location, living standards, peer groups and other non-monetary factors that could impact “happiness.”

However, the average that the Skandia Sentiment Monitor derived varies from country to country; Dubai locals say that they would require $276,150 to feel content, Singapore and Hong Kong residents also needed wealth in the realm of $200,000 to be happy.

European countries have more modest requirements compared to their Asian counterparts. The English need $133,000, the French even less, at $114,000 and bringing up the bottom of the list, the Germans with a frugal requirement of less than $100,000.

American respondents to the survey say that $ million or more would give the feeling of being rich. However, economists say that for a country as vast as the US and with such unequal income distribution, any figure would be at best an estimate and would vary from place to place. They say that a dollar will go a lot farther in Kansas than say in New York.

One can understand why Dubai needs the most, with all those oil barons, royalty and power resting in the hands of a few and an abundance of oil making their needs that much more than other lesser endowed countries, but Germany at the lowest rung makes for an interesting study.

Americans say that there is a lesson to be learnt from the fact that the Germans need the least and yet they have such a buoyant economy. That is because there the income distribution is more equal and the income gap between the rich and the not-so-rich is not huge. Since most people average around $50,000 a year, $85,000 seems a lot more.

On the contrary in America, even though the median income is around $50,000, a vast majority of the Americans don’t make that type of money and those who are rich, don’t make slightly more than $50K, but millions and billions more – hence $85,000 that makes the Germans feel affluent and happy would seem like peanuts here.

There is no end to requirements and no amount of money can ever be said to be enough. There is no price tag that is a perfect fit for everyone everywhere. There are those who need a closet full of designer shoes to feel complete and then there are those who keep out the cold from their feet by wrapping them in rags.

A more apt quotient for happiness money, is when you have enough, to stop worrying how you are going to pay your bills, how you are going to put food on the table and meet all the needs of you and your family and also indulge in some entertainment and fulfill some of your ardent desires and when contentment and satisfaction step in, happiness comes by default – “happiness” it seems cannot come from within a purse, it can only come from within you.

10 Ways to Express Your Company Culture
Let’s Get Social
Feel like getting in touch or staying up to date with our latest news and updates?
Related Posts
Latest In Work Relationships
BCG FEATURED JOB