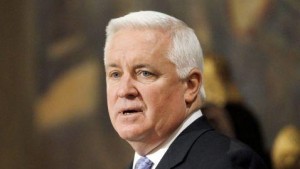 The Governor of Pennsylvania spoke on Monday about the lack of political will for the state to become a ‘right-to-work’ state, according to The Associated Press. Corbett is a Republican who has not made right-to-work a top issue while in office because he has fought unions on other problems. He also has never said if he would support a bill if it ever found its way onto his desk.

While making his normal appearance on the Dom Giordano Program on 1210 WPHT-AM in Philadelphia Monday, Corbett said, “There is not much of a movement to do it and lot of it has to do with the politics at the local level, at the county level and at the state level. Until I see a strong will to get legislation passed, we have a lot of other things that we have to get passed.”

“It’s a line in the sand we’ll fight very hard on,” said Rick Bloomingdale, president of the AFL-CIO labor federation in Pennsylvania.

Corbett gave a speech on Saturday in New York City at a Pennsylvania Manufacturers’ Association breakfast. In the speech, Corbett discussed his priorities for the future and never talked about right-to-work bills. Nine sponsors decided to support a right-to-work bill that hit the 50-memebr state Senate, with all of them being Republicans. Those who did not support the legislation were Senate President Pro Tempore Joe Scarnati and Majority Leader Dominic Pileggi. In the 203-member House, just 35 members supported the legislation.

The head of the Pennsylvania Business Council, David Patti, said, “This is a very pro-labor state and for the larger firms, they have long ago come to some accommodation with the workforce and organized labor. If I was waving a magic wand or could do it just because I said so, sure, but we’re not making an effort on it.”

The House Labor and Industry Committee chair for the previous two years, Rep. Ron Miller (Republican from York), said, “It is a very difficult lift and if the governor is saying he’s not going to lead the charge, I don’t see us getting it done.”

Unemployment Benefit Applications Increase
Let’s Get Social
Feel like getting in touch or staying up to date with our latest news and updates?
Related Posts
Latest In Work Relationships