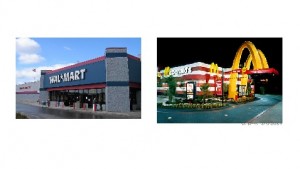 Who hires more minimum wage employees, McDonalds or Wal-Mart? The answer is that both of them pale in comparison to the U.S. Government, which employs more than both of them combined. Nearly 2 million private-sector employees make a sketchy $12 dollars an hour or less on government funds; often enough they make minimum wage. These employees may work for contractors, but a report from Demos shows they are ultimately funded by loans from Small Business Administration and federal health care spending.

“Most Americans would be surprised to learn that so many of the people working on behalf of America are really poorly paid and aren’t really earning enough to support a family,” said Amy Traub, a senior policy analyst at Demos speaking to the Huffington Post. “Taxpayers have some responsibility for these people. They’re working for us, in a sense.”

That would mean we’d have to raise taxes, and this after payroll taxes have already been raised to a new high and while government has cut spending by $85 billion dollars. A 2008 Suffolk University study came to the not-all-too surprising conclusion that forcing the government to pay market wages for construction work increased the cost of such projects. How such a blatantly obvious study got funded is uncertain, but our current situation with these 2 million private sector employees is the same. Sure it would be nice to give them more money, but who exactly is going to pay?

Low paying industries such as janitorial work and food preparation have long been low paying. However, the market is hiring a bit more now and unemployment is going down. Perhaps as the economy improves we will be able to better assuage these problems?

Let It Begin In 2010
Let’s Get Social
Feel like getting in touch or staying up to date with our latest news and updates?
Related Posts
Latest In Work Relationships