Home  » Post Recession: the Wealthy are at their Wealthiest 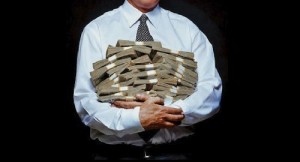 Though the recession was caused by the rich who were not managing their finances and investments correctly, who was hurt most by it? The poorer, with a demographic change of much the middle class slipping towards lower wage earners, and with 99 percent of Americans losing 12 percent of their income. Though the recession was caused by the rich, who benefited from it? The top 1 percent of wage earners has nabbed 95 percent of the income gains since the recession. Since so much of rehabilitating the economy has been making the stock market more secure, and since the top 10 wealthiest own 90 percent the stock, we’ve seen the recovery become a recover for those who least need it, with the top 1 percent earning more than 20 percent of the country’s income last year.

The wealth disparity is the greatest it’s been since before the great Depression, when it was just above 20 percent. In 2012 it was at 22.5 percent. And this is not something that is likely to alter greatly under the changes in the tax policy. With the very richest, the 0.01, surging to a 32 percent increase.

Job seekers, naturally, enough, must slodge on as gracefully as they can, and work their best to secure the best employment available. This much, at least, we can do. About gross economic policies, that’s an ongoing project.

Eagle Creek Adding 1,000 Jobs in South Dakota
Let’s Get Social
Feel like getting in touch or staying up to date with our latest news and updates?
Related Posts
Latest In Work Relationships