Home  » Minimum Wager Earners Have Lost the Most in the Recession 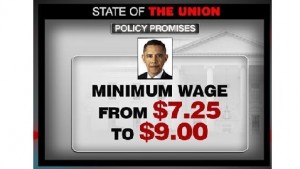 Who are the worst hurt by the Recession of 2008 and 2009? Not the rich, but the poor, have seen the greatest loss. As more jobs slip from middle class to lower class, the lowest wage earners, the minimum wage earners, aren’t even keeping up with inflation. When taking that into consideration, the Bureau of Labor Statistics notes that home health care aids fell 5 percent in earnings from 2009 to 2013, restaurant cooks 7.1 percent, food preparation workers 5.2 percent, and maids and housekeepers 5.0. Many of them qualify for food stamps and are considering impoverished.

Heidi Sheirholz, an economist at the Economic Policy Institute said that with unemployment at 7.6, it’s an employers’ market, and they don’t have much incentive to give more to prospective employees.

“When your employer knows you don’t have outside options – and this is not a moral judgment here – they just don’t have incentives to pay you big wage increases or even fair wages to keep you, said Shierholz.

President Obama meanwhile would like to raise the federal minimum wage to $9 an hour to keep up with inflation, while Democrats would like to see it set at $10.10. Whether we can move in this direction or not remains to be seen, but for the lowest earners, full time work, which can be work of especially difficult nature, isn’t enough to live on. Job seekers can barely survive on such a minimum.

Obamacare Fails
Let’s Get Social
Feel like getting in touch or staying up to date with our latest news and updates?
Related Posts
Latest In Work Relationships