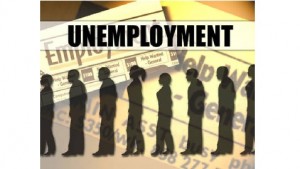 The deadlock in Washington is severe, a knot so tight the entire nation is quaking, and taking the time to untie it is an option we no longer have, what with the deadline on our debt default at Oct 17. Some early signs of the damage done by government furloughing of hundreds of thousand of employees comes from the number of unemployment claims that were just reported; they are at six-month peak, at 374,000. But if you take into account that this number was artificially bumped by computer- backlogs in California, and some non-federal workers hit by the government shutdown, the number is actually in line with the lower numbers we’ve been seeing.

15,000 of the claims originated in non-federal workers affected by the partial government shutdown. Many come from California technical problems in upgrading their computers, which has deferred previous claims.

What we’re seeing, over all, is a market that is getting antsy with the deadlock in Washington, consumers less likely to spend, businesses less likely to hire, but not dramatically so — not yet.

“It’s one weeks’ numbers. The numbers are noisy, but it’s yet another signal about how employers are reacting to the fiscal deadlock in Washington,” said White House Council of Economics Advisers Jason Furman

Government Has Highest Surplus, Stock Goes Wild
Let’s Get Social
Feel like getting in touch or staying up to date with our latest news and updates?
Related Posts
Latest In Work Relationships