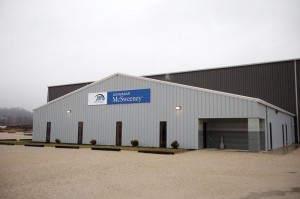 Developers of The Point Industrial Park are working to add more jobs for residents of the South Point, Ohio area in 2014, according to The Herald-Dispatch. In 2013, there were 200 new jobs created at the park by developers.

The park is 500 acres and the jobs added in 2013 occurred at a FedEx distribution plant, Orica, and Intermountain Electronics, according to the industrial park director, Jeremy Clay.

Right now there are some 500 jobs at the park, Bill Dingus, executive director of the Lawrence Economic Development Corporation, said. Dingus is hoping to add enough jobs to reach 700 within the next couple of years.

“2013 was a great year at the industrial park,” Clay said. “I don’t know that we can duplicate that in 2014, but we have several projects that could bring more jobs to The Point in 2014.”

Dingus said that one of the largest projects is constructing a river dock on property owns by the development company. It is along the Ohio River. The contractor hired to build the dock is Southern Marine, from Chattanooga, Tennessee. The project is going to cost $4.5 million and should be complete by the end of June.

“It will operate as a public port. It will be a real draw. It will allow for the movement of oversize or overweight products via the Ohio River. We’re also planning to add a $4 million rail spur to the port,” he said. “We are working with the Economic Development Administration on the project.”

Early in 2014, the remodeled Chatam Steel building will be getting a new tenant, Jennmar McSweeney’s. This move will add 120 jobs to the park.

Additional 5,000 Jobs to be Cut by Hewlett-Packard
Let’s Get Social
Feel like getting in touch or staying up to date with our latest news and updates?
Related Posts
Latest In Work Relationships