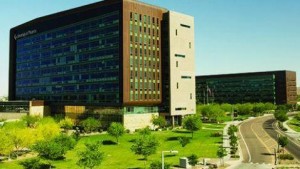 It was announced earlier this week by Apollo Group Inc. that the company will close over 100 University of Phoenix campuses and learning centers that will cut 800 jobs across the country, saving the company $300 million. A large chunk of the 328,400 students take their classes on the internet, which means that the campuses being closed are not in demand, according to spokesperson Alex Clark.

The company said that 115 locations will be closed, which will impact 13,000 students. Of the 115 locations, 90 of them are learning centers and 25 are campuses. After the closures take place, just 112 locations across 36 states will be left in operation.

There are nine facilities for the University of Phoenix in Phoenix, Mesa and Tucson. Of those nine locations, just one will close and it is a learning center in Nogales, according to Clark. Of the 800 jobs being cut across the country, 300 of them will be cut in Arizona. The money being saved by Apollo will be reinvested into the company’s online platform and will be used to renovate and modernize the 112 remaining locations.

“This decision is in direct response to student demand to what students have told us and demonstrated what they want,” Clark said. Clark also said  that the campuses staying open require hands-on learning programs including counseling and nursing. The announcement was made as Apollo said it experienced a drop in net income and revenue in the fourth quarter.

Apollo reported its income of $74.2 million on revenue of $996.5 million for the three months that ended on August 31. This is a decrease from $183.9 million in income on $1.1 billion in revenue for the same time frame in 2011. Total enrollment decreased 13.8 percent but was still in line with expectations, according to Trace Urdan, a senior analyst at Wells Fargo Securities LLC.

“While the weakness in revenue per student seems a function of a higher level of discounting in the quarter, the sudden weakness in starts is somewhat more mysterious and suggests either a change in enrollment practices or a change in the ambient market, though we have not heard anything from other operators to suggest that there has been such a sudden shift in consumer sentiment,” Urdan said in a report.

Disney Interactive to Cut Hundreds of Jobs
Let’s Get Social
Feel like getting in touch or staying up to date with our latest news and updates?
Related Posts
Latest In Work Relationships