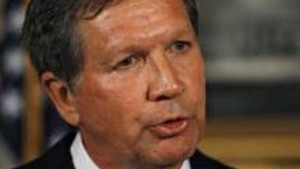 On Monday, Ohio Governor John Kasich held the first meeting of the Governor’s Executive Workforce Board. Kasich said that he wants workers in Ohio to be trained for jobs that companies in the state are trying to fill. Many believe that this should be an easy task since there are openings in the fields of energy and health care but Kasich said it is not, according to The Columbia Dispatch.

“We have job openings, but yet we don’t have people to fill them,” Kasich said to business leaders and lawmakers at the meeting.

The panel, which consists of 25 members, was appointed by Kasich so the government could coordinate with businesses in the state of Ohio in order to point out future work-force needs and make it easier for the 90 government funded work training programs to operate across 12 agencies. Kasich said that he also wants the universities and colleges in Ohio to design their programs as well.

Kasich made it known during the meeting that he is in need of better cooperation from the companies operating in the state. According to the governor, the administration has been asking companies to send future jobs forecasts but many of the companies have not been doing so.

“We’ve asked the energy companies to give us their list. I can’t tell you how many times I’ve asked them. We’ve had a few dribble out, but not all we want.”

Kasich continued: “We’ve got to convince businesses from Ohio that it’s safe to tell us what they need. Once we know what they need, then we can begin to fashion this curriculum and training programs to meet those goals, but it has been extremely frustrating.”

Kasich also said that the universities and colleges in Ohio are prepared but need some guidance from businesses operating in the state. “Once they get the direction, they’ll move,” Kasich said.

Money to train workers will come from a voucher program that provides “20 or 30 million dollars” from casino revenue. Companies could be eligible to receive as much as $500,000 to train their workers. Kasich said that the state will also consolidate and coordinate training programs that are already operating, with the majority of them focused on unemployed workers.

R. Blane Walter, the Founder and CEO of InChord Communications, said, “What we’re trying to create is an effective marketplace, an effective system. We’ve got a lot of talent in the state; we’ve got a lot of great companies. It’s trying to make sure we do as good of a job as we can to develop that talent and understand where business is headed (so) we have people trained and ready for those jobs.”