Home  » Fires In Asian Garment Factories Claim 400 Lives: Can Walmart And Other Buyers Absolve Themselves Of Responsibility? 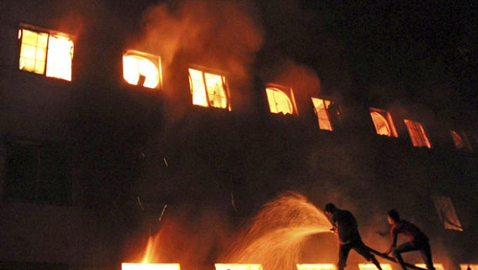 Is the life of an American worker more precious than the life of a worker in a Bangladesh factory tailoring clothes for Walmart or a factory in China manufacturing appliances for Apple? Are lives being sacrificed on the altar of commercialism? Are American corporate giants right in believing that whilst it is their right to receive the services and products for which they have paid, it is not their duty to oversee or monitor working conditions where these goods are manufactured? Can the American companies absolve themselves of the guilt and responsibility and the shame that such happenings bring in their wake?

The unfortunate and avoidable deaths of around 400 workers in two recent fires in Bangladesh and Pakistan, has caused outrage and concern among consumers in America for whom the companies were making garment.

Consumers shocked by the immensity of the tragedy are advocating for better and higher safety standards and saying that it is the duty of the American manufacturers who outsource work to them, to see that workplace standards are implemented and that they must bear the cost of such installation.

Eyewitness and media accounts of both the fires show that the deaths could have been prevented even if the fundamental safety procedures had been in place. Emergency windows had been barred to ensure that no thief broke in and the factories had normal exit and enter doors, nothing for emergencies.

Guards at the Bangladesh factory actually dissuaded workers from fleeing the place, telling them that the fire warning was a false alarm.  When they realized they were wrong, instead of helping others, they fled.

More than 500 workers have lost their lives in Bangladesh factory fires, a country that has become the second largest exporter of garments in the world and has upwards of three-million people working in their garment factories.

Whilst it is obvious that basic safety methods have to be installed and it is equally obvious that the government in these countries and the factory owners are lax and corrupt law-enforcers will look the other way, in exchange for monetary considerations, when safety violations are exposed.

Tazreen Fashions Ltd. tailored clothes in Bangladesh for Walmart and other retailers. Walmart has since said that it had stopped giving Tazreen orders after it found safety violations. But Walmart work did find its way into the factory through sub-contractors.

Critics say that it is hard to conceive how Walmart could not have known that its clothes were being manufactured here, given that it is one of the two biggest buyers in Bangladesh.

The factory was a huge fire-risk and a very unsafe place to work.  The building was incomplete, repair and other construction work was in progress, even as hundreds of workers continued to work inside – and worse, highly, inflammable yarn and fabrics lay strewn all over the floor.

The onus therefore lies on the likes of Gap and Walmart to stop buying the goods until the factories like Tazreen, create safety infrastructure – their economic strength and determination will certainly make them see reason and the message will go through, that while a human life may be dispensable to them, to Americans it is not.

News reports however, reveal that Walmart and others are disinclined to either share the cost of implementing safety measures or agreeing to buy the clothes at a slightly increased price that adds in the new costs.

Economists say that a mere 3 percent increase in the prices could enable the factories to increase revenues sufficiently to create appropriate safety infrastructure – surely it is a small price to pay for such big business houses, especially when it comes to protecting the lives of thousands.

Walmart and others should shoulder a little responsibility and show some accountability. They have to monitor the factories where their goods are manufactured and specifically tell them what sore of standards they accept from them – until they fulfill all the requisites, just don’t buy from them.

Fires In Asian Garment Factories Claim 400 Lives: Can Walmart And Other Buyers Absolve Themselves Of Responsibility? by Harrison Barnes
Tags: health and safety
Tweet Like Plus Pin It Share