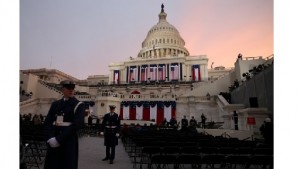 With Congress playing a high stakes game of what amounts to chicken, both set on their path and unwilling to swerve, the nation grew antsy, wondering if we would default on our debt, causing another economic recession like the last that had cost so many people their jobs these last few years, something we’ve just barely crawled out of. After Congress finally made a deal today, ending the government shutdown and orchestrating things so that this sort of game can’t be played again, there is a sign of relief from investors as the S&P 500 rose to within 1 percent of its record high.

“There’s some potential for ‘sell the news’ – when we resolve the issue in Washington, we’re going to have to focus on the fundamentals and earning season, and those haven’t been a resounding success to this point,” said Bruce McCain, chief investment strategist at Key Private Bank. “And the Beige Book suggest that people have become somewhat cautious in spending and investing because of the debt crisis.”

Having resolved it, job seekers can return to their objective with the confidence that things will continue to get better, not worse, that the markets are going to grow, albeit slowly, and that your next job may soon greet you.

Lockheed Martin Relocating Jobs to Fort Worth, Texas from Marietta, Georgia
Let’s Get Social
Feel like getting in touch or staying up to date with our latest news and updates?
Related Posts
Latest In Work Relationships